When a company wants to have a presence on various social media channels, it can be quite time-consuming. That is why many marketers use a social media tool to be able to post on the various channels, follow up on reactions and make analyses with a single program. I did the test and compared three popular tools: Buffer, Later and Hootsuite.

Buffer vs Later vs Hootsuite

Thanks to a good social media scheduling tool, you can save a lot of time. I myself have been using "Hootsuite" for quite some time. But I was also curious about the possibilities of Buffer and Later. What did I notice? Every tool does have its pros and cons. A lot depends on which social media platform is important to you or your business.

In any case, I have tried to write as objective a review of Buffer, Hootsuite and Later as possible:

Let's start at the beginning: Buffer is a cloud solution that you can use both for free and for a fee. As you can predict, the price depends on the number of connected social media channels and the desired features. The paid formula you can 14 days of free testing. In doing so, you do not need a credit card.

Buffer can connect you to Instagram, Facebook, Twitter, LinkedIn and Pinterest. Compared to many other tools, Buffer is rather austere/minimalist in terms of layout. Personally, I would have chosen a vertical menu structure as the main menu instead of horizontal. Also, when switching to a different view (e.g. from daily to weekly or monthly view) something strange happens and a new window suddenly opens in your browser.

Buffer also has an Android and iOS app. Unlike the web version, I do find the layout here very clean and clear. Unfortunately, the functionality is not 1-to-1 the same, yet I can definitely recommend the app.

Then again, what Buffer does well is recommend times to do your posts. In doing so, you're going to find that even the ideal time to post is different for each platform. Quite logical of course. Note: by default the time zone is set to 'London - Europe'. Best to adjust it at your first login to avoid surprises.

Posting effectively on the various social media channels goes very smoothly. Which, of course, is still the most important part of a social media management tool. Unlike Hootsuite, for example, Buffer does not allow you to post to multiple platforms at once. So you have to do this one at a time. Furthermore, you can upload both photos and videos to use with a post. If you refer to an article on your website, it will also see if an image can be retrieved. By the way, urls used will be 'buff.ly' links. In other words, Buffer uses its own url shortener.

Is LinkedIn an important medium? Then you might want to consider another platform as both tagging people (LinkedIn API does not allow this) and companies in a post is not possible. Update: I personally find it a bit cumbersome, but nowadays you can tag a company by using the URL of the company page in your post.

A great asset of Buffer is its "Analytics" section. It contains a comprehensive, nicely displayed overview of your social media channels and associated posts. Allowing you to potentially discontinue other licenses (think Supermetrics, for example) and thereby save some euros per month (or invest in a paying Buffer account).

In closing, I also like to mention that with Buffer Start Page you can quickly and easily create unique landing pages. Which can come in handy for certain social media campaigns you want to do. Last but not least, if you don't want hackers to snatch your account, you can enable additional security at 'My Preferences' > 'Security' > 'Two Factor Authentication'.

If you are a marketer primarily active on Instagram, you have undoubtedly heard of Later. So this social media planning tool targets mainly companies and influencers who are active here. Later you offer the option - again without a credit card - to use the platform to be tested for 14 days. Afterwards, you can opt for the limited free formula or switch to a paying account.

Compared to Buffer, I find Later's layout more user-friendly. Especially the content calendar is a lot clearer (choice per week or per month). Both placing new posts and moving existing ones is all done via drag & drop. 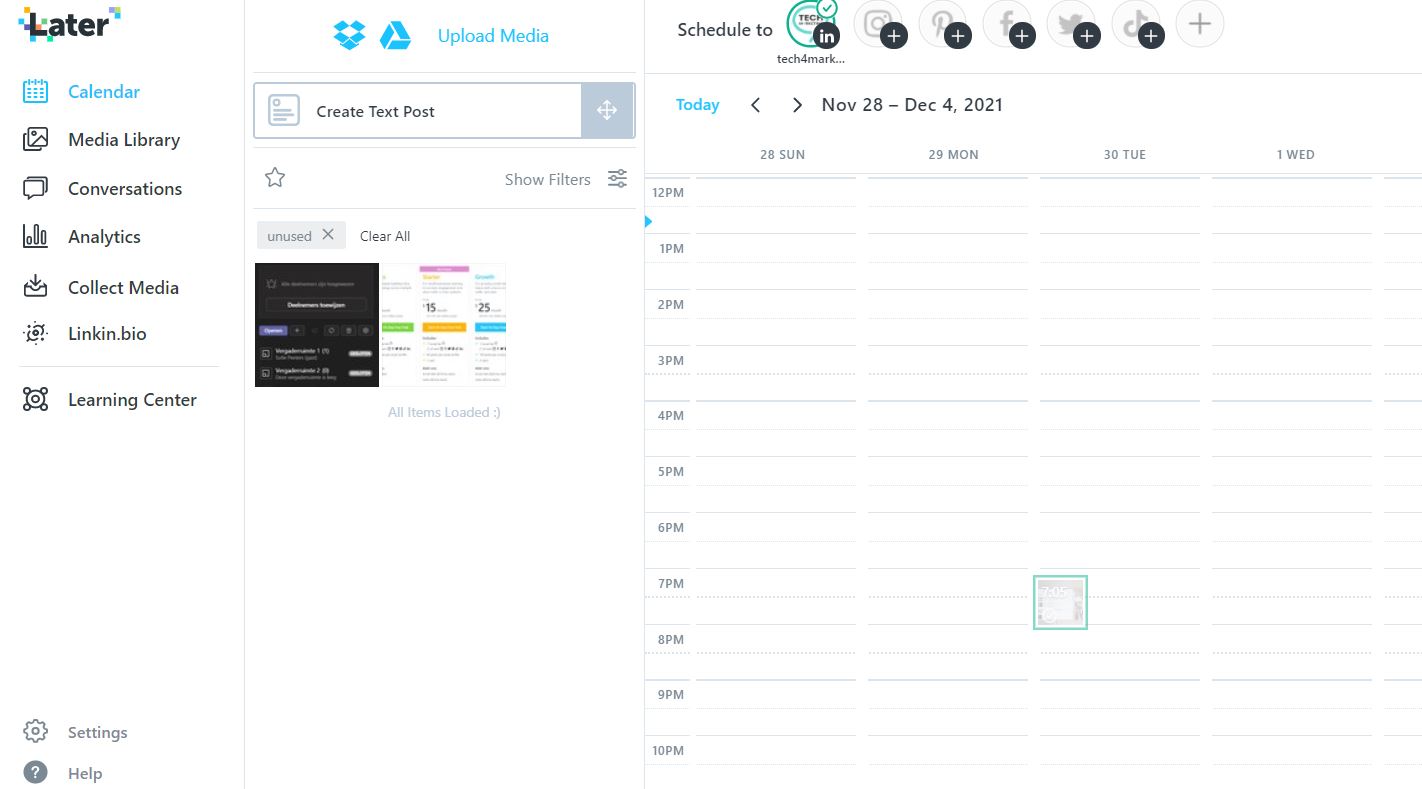 That Later is mainly aimed at Instagram users is noticeable by some specific features such as 'Conversations' (manage Instagram comments) and 'Linkin.bio' (add call to actions to your posts). Nevertheless, you can also use Later for LinkedIn, Pinterest, Facebook, Twitter and TikTok.

If you are going to use Later only for Instagram, Pinterest and/or Twitter you are going to find the reports in Later ('Analytics') super. Unfortunately, it doesn't offer dashboards for TikTok, Facebook and LinkedIn. Especially these last two anyway important for most marketers. Even when you go to view an already published post on these channels, you won't see any numbers. 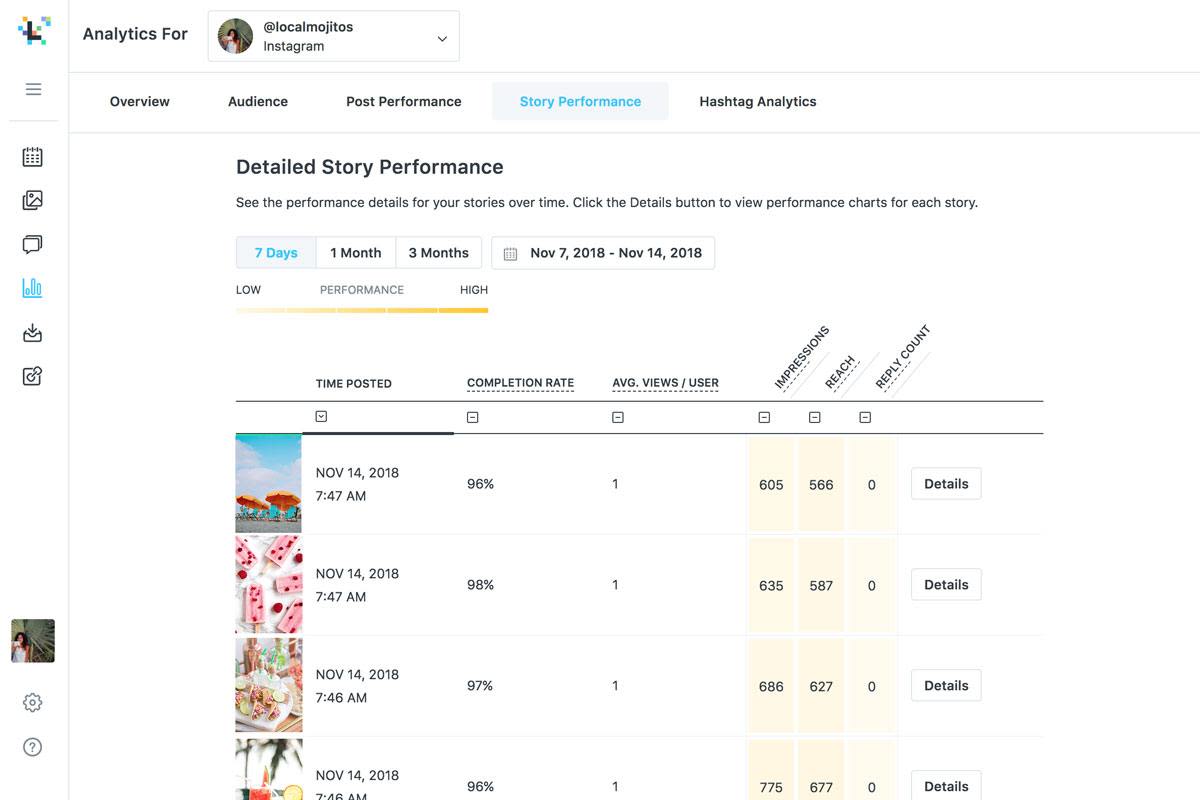 Many forums read that Later would not have support for LinkedIn. So since this year, there is. Unfortunately, the functionalities are still limited. As cited above, there are no reports and also tagging companies - as with Later - is not possible.

To complete the story, I would like to add that I have not found any possibility of multi-factor authentication. I read on the Later forum that there are still users noticing this.

Last but not least: Hootsuite. Perhaps the most well-known tool among marketers. It makes sense, because with nearly 20 million users worldwide, it is the most widely used social media planning tool in the world.

Unlike Buffer and Later, Hootsuite requires a credit card to use your 30-day free trial launch. You have to look carefully on the website, but Hootsuite does have an option to use the app for free. Of course, with limited features.

Both the web version and the Android app are comfortable in terms of interface. At first it may seem a bit busy, but everything is laid out reasonably logically. In my opinion, Hootsuite has all the features you expect from a social media management tool: post or schedule posts instantly, post on multiple platforms simultaneously, schedule posts for approval, view and reply to incoming messages, etc.

Nice to know here at both Facebook and LinkedIn you can also boost your posts. Also handy is the 'parameters' feature with your posts. Useful to give structured UTM codes. 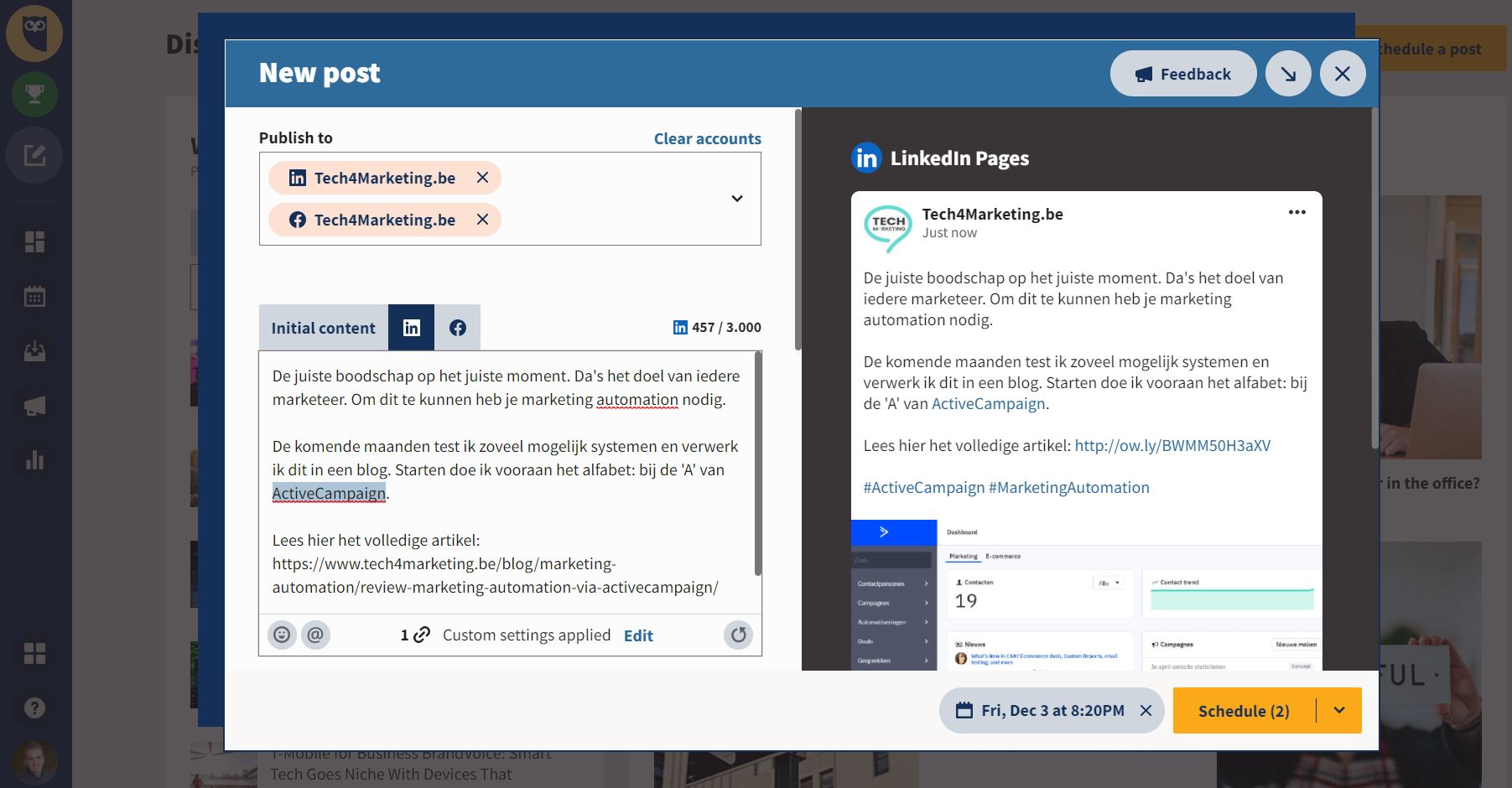 If you - like me - are crazy about data and analytics you should definitely check out Analytics in Hootsuite. There you will find some graphically very handsome dashboards. Unfortunately, certain features ('Post Performance' and 'Best time to publish') are only accessible to users with a 'Team license'.

As an avid LinkedIn user, I was pleased to see that in Hootsuite - unlike Buffer and Later - you can indeed tag companies in your LinkedIn posts (e.g., you can tag a company. @Tech4Marketing.be). Still pretty essential when you want successful posts on LinkedIn. The above reports and the aforementioned ability to advertise there, surely makes Hootsuite my favorite social media tool for LinkedIn.

Are you a B2B marketer and in doubt between the above platforms? Then I have only one advice: choose Hootsuite! Is Instagram your main social media channel (B2C companies or influencers)? Then I recommend testing Later. 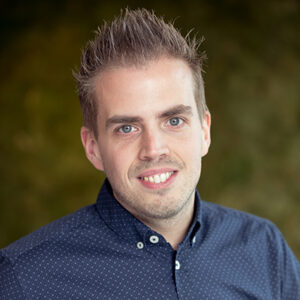 When a company wants to be present on various social media channels, it can be quite time-consuming. That is why many marketers use a social media tool to be able to post on the various channels, follow up on reactions and make analyses with a single program.